Home › Uncategorized › How to train your dragon

How to train your dragon

One hundred miles can be quite a long way to run, especially when it includes over six thousand metres of ascent and descent (comparable to a return trip from Base Camp to Everest’s summit); a lot of rough or technical terrain; navigation challenges; a long night of darkness; and is actually 175kms (not the 161kms that equals 100 miles). As such, a bit of training is a good idea, and if chasing any goal beyond mere survival, a LOT of training is called for.

The event is the GNW100, which follows the Great North Walk track from Teralba, near Newcastle in New South Wales, down along the Watagan Ranges before finishing up at Patonga Beach, near Woy Woy. Billed as ‘Australia’s toughest ultra’ – though arguably slightly easier than the Alpine Challenge 100 Mile in Victoria – this race does not mess about.

I was sufficiently in awe of the course to be prompted to write myself a training schedule, the first time I’ve done so since my first road marathon. I will share here the process I went through, the rationale behind the structure, and the schedule as it stands (despite being only three weeks into the 15 weeks of training and not having done the race yet). I will then write a retrospective after the race, and possibly a tweaked version of the schedule, based on any ‘learnings’ I might have. 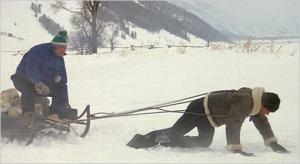 Balboa works through a ‘strength’ phase

Unlike previous training approaches, written or unwritten, I started this from the top down, based on recently published insights from world champion orienteer Hanny Allston, drawing on the wisdom of her coaches and mentors, and her own experiences applying it. In short, I wanted to build in the three phases of training prescribed by her structured approach: a period of aerobic conditioning at the start, followed by a period of strength training, with only then allowing the focus to shift towards pace. At a high level:

Aerobic conditioning: I wanted to start here to ensure a solid base from which to build. This was definitely necessary for this race, as I had deliberately allowed my condition to deteriorate since my last major race, whereas previously I had gone from race-to-race for seventeen months without a sufficient gap to lose aerobic fitness.

You’ll see on the schedule that this ‘Aerobic’ phase extends for the first 6 weeks of training, on paper. In reality, there is a lot of overlap into the next phase, when you consider the type of activities baked in there. My approach to the aerobic phase was to get the weekly kilometres back up, with an emphasis mostly on mid-length to longish sessions on road.

Strength: Here, for the four weeks in the middle, the focus shifts a little. Many of the kilometres are still made up on road, due to practical constraints that require much of my running to double as commuting. However, more of the kilometres and long runs are pushed to the trails (hills) of a weekend, which in the previous phase were largely constrained to my ‘baseline’ 18-22km Sunday morning outing (usually in various parts of the Dandenong Ranges – often on the course of the ‘Rollercoaster Run’), which I would anyway do throughout the year, regardless of any training goals.

It’s not reflected on the schedule, which is just dates and numbers, but these hill sessions have now taken on a slightly different focus for me. Whereas I used to measure success by my ability to maintain some kind of running gait up nearly all of the hills, and hence good average pace for the terrain, the intent now is to also apply more deliberate strength training techniques outlined by Hanny and her mentors before her: ‘bounding’ up the hills; ‘bursting’ – deliberately destroying the legs on some of those steep gradients in order to ingrain muscle memories that should lead to greater power output later on.

Pace: Six weeks out from the event the interval training comes to the fore. Part of the reason I have deferred this to so late is to follow the structured approach recommended by Hanny Allston and others, but my key motivation is that the back injury I incurred during intervals at the start of the year is still not entirely safe, and so I’m hoping that by giving myself the extra time and training before recommencing fast running, I will have a better chance of not again finding myself incapacitated for a couple of weeks!

In the past, my interval training has been strictly limited to ‘Yasso 800s’ – 10 x 800 metre intervals (keeping each rep below 3 minutes) – plus about a km’s warm up and cool down. This time I will mix this up more, by adding some faster sprints over shorter distances, and also some longer sustained intervals – up to the 1200m or even 1500m mark. You’ll notice the weekly kilometres do not come down in the ‘pace’ phase. I have had no advice to suggest they need to, with the more relevant focus probably being on ensuring the long runs remain ‘easy’ and do not morph into unplanned tempo runs.

With the above structure in place, I then set weekly distance goals, within which to vaguely try and plan out each week. I should emphasise that the planning at this day-by-day level was only for indicative purposes – popular wisdom warns against trying to be too regimented, acknowledging the need to ‘listen to the body’ and adapt training plans accordingly. That said, I have always been suspicious of giving ‘the body’ more than a cursory hearing, a similar approach to the one I take in parenting…for, as would a six-year old, the body has a tendency to whinge and whine disproportionately to its actual needs, and the result of listening much to either of them would be a whole lot of inaction.

At some point soon I’m going to pen a whole piece about working around the constraints of a busy life in order to fit in the hours to grind out the kilometres that stack up to the training outcomes, so I won’t dwell too much on that here. Suffice, for the moment, to say that the day-by-day plan was structured such as to factor in the known immovable commitments in an average week.

I also built in cycles of building up kilometres for a couple of weeks before easing off slightly for a week, to enable mini-recoveries. This has been a big miss in my previous training regimes and I think it will be highly beneficial.

Once I had drafted the week-by-week schedule I took the unprecedented step of sending it out for peer review. I say ‘peer’ review, but it was more accurately a ‘superior’ review, as all three runners I sent it to were squarely out of my league (David Overend and David Wilson have together been on multiple winning Oxfam Trailwalker teams and individually distinguished themselves at plenty of other events; I don’t think Brian Jones has won anything – although he wouldn’t have mentioned it if he had – but regardless he’s always at the pointy end of some very tough fields, and ran the second fastest Australian time at Western States 100 Mile the year he did it).

Sending out the schedule turned out to be one of those off-the-cuff decisions that unexpectedly paid massive dividends.  I got some great feedback, with strong consensus from all three, which is condensed here:

Other things that have changed about my approach are:

The cross-training is not reflected in the schedule, which is only about running, but can be significant in terms of hours of exercise in a week. To bring it all to life, here is last week (only Week 2 in schedule, so kms still relatively low):

2 comments on “How to train your dragon”