Home › General › A year to forget?

A year to forget?

I shouldn’t rubbish 2014 – there were plenty of awesome moments – but I will. Many, many things were really much harder than they should have been. My experience at work was the worst it’s ever been. I nearly left. At home,

despite the enormous joy that comes with having a toddler in addition to two young primary schoolers, it often felt like I was being pinned down while someone poked toothpicks into my ears. I didn’t nearly leave, but there were moments. In terms of running, at any given point some part of my body managed to be rebelling, at times making me think I had some rare degenerative disease that over time causes every muscle to collapse in on itself. Everyone told me I should quit.

It seems – touch-wood – I am already starting 2015 on a better footing than I did this year. By this time last year, I was already badly injured, after causing my calves to ‘meltdown’ in the process of forcing my overheated, underdone body to the finish line of David Overend’s ‘Peak-to-Port’ 75km run on December 1st (claiming 2nd place in the process, thank you very much…out of how many runners? I hear you ask…well, the DNF rate was nearly 50%…)

Whether that was compartment syndrome, or something else, was under debate, but I was out of action from December 1st until New Year’s, with only a couple of hill-walking sessions serving as training for the Bogong2Hotham 64km Rooftop Run (video here), on January 11th. Under the circumstances, I was happy with my performance in that race, though did not complete the run due to being one minute over the cut-off at Langford Gap: basically a lapse in concentration I don’t intend to be in the position to repeat when I return this coming January.

Bogong2Hotham left its own mark, though. This time in the form of lower-back issues. These became suddenly serious during an interval session a week later, which left me more or less crippled. Again, a few weeks out of action, and then only very small baby-steps towards running. Such was my preparation for the Tarawera 100km (video here) in NZ, in March. My back held up quite well there, but the weather, in the form of Cyclone Luci, meant the course was reduced to 72kms. Still, I was reasonably happy with my time and position in the field (and the rare pleasure of making way for Sage Canaday coming towards me from an out-and-back). Tick.

Then it was back to training with only four weeks to prepare for the Coburg 24 Hour. By this stage I had already revised my goals downwards, from a 200km target to…pretty much anything I could get. Success would be measured by whether I was still completing laps at the 24 hour mark. My range for happiness was from 100miles upwards. I managed a couple of longish runs in the lead-up to this, but was still very much impacted by my back. On the day, the back did play up at one stage, but had nothing as much impact as the crippling pain in my…liver? – which kicked in very early on (six hours in). Plus the impact of my left foot/ankle blowing up after only 100kms, stopping me from running and forcing me to walk out the remaining time on the clock, reaching that 100 mile mark only minutes before the finish. Tick?

At the time I thought I recovered pretty well, pretty quickly from the 24 Hour. I took it easy for the four weeks between that and the Wilson’s Prom 100km (video here), which was always intended as a birthday outing in the beauty of nature, not an attempt at any kind of achievement. Despite my legs really feeling the pain for the first half, and my back again being a great cause for concern, this run went otherwise quite smoothly, and delivered all the beauty and awe I asked from it, and more! Mentally, I was prepared to be out there for 16 or 17 hours, so 14h46m was a reasonable result. Tick.

I then got serious about recovery, taking it super-easy for 5-6 weeks before starting to train at low kms on a long schedule to condition for the GNW 100 miler. As I built up the kilometres, all seemed well. I was cross-training in the pool and on the bike, hoping this would keep my back honest. I was running fast and strong, hitting the hills mercilessly. Then, after a 50km night run, I headed out for a very chilly 10km trot along the bay and my knee blew up.

Fast forward, and after almost twelve weeks of nearly no running, apart from barely surviving through the You Yangs 80km and the BerryLongRun 72km (now an official race for 2015, my debut as Race Director. Challenge yourself with the BLR70!), I went into the GNW 100 miles with my knee still bad and almost no hope of finishing. In the end, I was kind of happy to make it to just the 100km finish line, the last 40km of which I could only walk, supported by long sticks I found in the woods (which tore my hands apart). 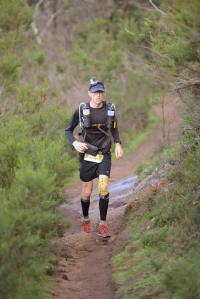 Grinding up a hill at the You Yangs 80km

I then shunned the strategy of total rest that had got me nowhere in the final four weeks leading up to GNW, and instead recommenced running in a regular, dedicated fashion. Keeping the distances low to begin with, very gradually building up. My knee complained a lot. It still does, having now built back up to 25-30km runs (though still only about 60km-70kms per week), but a fierce focus on form: on keeping those glutes activated; keeping my cadence up; keeping my legs together – has been getting me through, surviving the runs and not seeming to go backwards (fingers crossed).

So I signed up for a race, to prep me for Bogong2Hotham in January. Just a 50km trail run – at the Duncan’s Run Hundred in Gippsland, which looked like quite a tough course – no flat sections at all. Now, I had originally drafted this article prior to the race and was expecting to have published it already. The original version speculated that perhaps how well the race goes might be a prelude of how 2015 will go for me. I certainly hope that’s true now: the race happened a couple of days ago, and my knee gave me no trouble at all. Better than that, I recorded my first podium finish, in third place! Maybe things are looking up?

I checked my stats on Garmin the other day. They don’t tell the 2014 story at all. Somehow this year I have run almost exactly the same distance as I did last year (when I ran 10 ultramarathons and 1 road marathon), despite all the injuries. Over 3,000kms with over 50kms of vertical climb. How I managed that with so many weeks off is beyond me…and perhaps there’s an important lesson in it for me: don’t try to run such big training weeks, you knob!

Would I forget this year if I could? Of course not. As so often happens, hindsight softens the edges and highlights the highs. This is certainly true when it comes to my home life (luckiest man alive) and my running (when it works it’s transcendental). I would still happily forget this year at work, though!

In terms of adventures, my two highlights: Firstly Tarawera, in New Zealand – the fun times had in getting there and back (with Friend Ben) are as integral to the experience as the landscape around Rotorua and the run itself; and secondly, as planned, my mission into New South Wales for the GNW100s, but for quite different reasons than I had intended. The parts of the Great North Walk that I got to see are imprinted on my brain like a chick’s mother; the magnetic pull to return is equally as instinctive. That is the trail of trails. The concept of attempting GNW uninjured is almost too much to hope for. I must contain my excitement…and not overtrain!