Lazy glutes. I always thought it was a passing fad; a convenient catch-all diagnosis for physiotherapists to fall back on when patients present with any running related issue, from achilles, moving up via the peroneal tendon, through the knee, into the ITB and up to the TFL, as well as around into the adductors…and probably any other part of the leg. And, yes, I have presented with symptoms at every one of those points in the structure!

One of the reasons I was never convinced, was because early on, with adductor issues, I was eventually referred-on to a top-dollar sports physician who got me to push against him with the outside of my leg and declared my glutes strong, which didn’t surprise him as I was a fairly keen cyclist back then (before I became a crazy, running-addicted, feral native and disappeared cackling into the mountains, leaving my carbon road bike in a canal). Dr Professor then went on to rant at some length about physios and how they have a habit of latching on to the latest article they’ve read, inappropriately applying the theory to every other patient they see.

I no longer think he was right, both about the glutes thing, and in his opinion of physios in general.

After three years in which I experienced problems at each of the links in the chain mentioned above, I now believe the only thing keeping me on my feet is my eventual capitulation to some kind of glute-focused regime. This regime is probably not what my physio or osteo had in mind, but has organically developed with input from both, and incorporates exercises – when I get around to them – suggested by them.

While I think the exercises are certainly beneficial, and over time may more permanently resolve my issues, especially if I start to follow them with greater rigour and frequency, I feel that the main thing keeping me mobile right now is the mental focus I am bringing to my running, which relies heavily on some creative visualisation.

Since starting long distance running a few years ago, I’ve found I’ve made fairly heavy use of various ‘mental models’ that enable me to switch gaits, change aerobic burn rates, stay sane, stay positive and Harden The F**k up. For example, to get a good dose of HTFU I sometimes use one of my more distinctly defined mental models, it has a name… 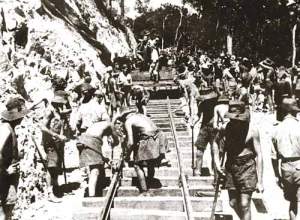 Slave labor on the Thai-Burma railway

The Kokoda Model (actually a misnoma, as my war history turned out to be muddled)

It goes a little something like this: use all the random visual snippets you have cobbled together from various books, stories, films etc about the experience of POWs undertaking slave labour along the Thai-Burma railway in WWII. Conjure it up. Imagine the forced marches they had to undertake to get from A to B. Imagine the heat and the state of their health and nutrition; their inability to even grab some water or an extra ration of gruel, let alone bang a carb gel. Imagine you’re one of them and you just have to keep taking step after step or you’ll be pistol-whipped and potentially left to die. I then overlay on this my own current situation. The key contrasts being, A) I am pretending I’m in that situation but I’m actually here by my own choice and, however many hours/days that may still be left of this particular run, there is a defined finish point, after which my life returns to comparative luxury; B) I have enough water (not always entirely true, but in relative terms still a big contrast); C) there are generally some miracles of modern science somewhere in my pack I can fall back on for support if absolutely necessary, such as double caffeine gels; D) if I had to, I could quit, but given all of the above and in respect to the POWs’ suffering, how weak would that make me?

Obviously, the Kokoda Model is far more about managing the mental state than the physical. But some of these models involve visualising what I want my body to do. For example, a simple one that I’ve used to bring my gait back from a survival shuffle to more of a run just involves pretending I’m pedalling a bike. This brings my footfall into a narrower landing window, each foot landing closer together and more directly beneath me, as well as lifting the strike more forward towards the mid-foot-to-forefoot zone, as my mind chases the higher cadence and tells my feet it’s pushing back slightly on pedals that aren’t there. This doesn’t require all that much additional muscle energy, but can lift the pace and, more importantly, make it more sustainable. 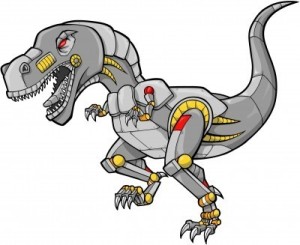 Yeeeeah! Having a name like that is half the battle won, right? This is, I think, activating my glute-max and glute-medials and I believe it’s protecting my knees. It is why my brain has been stealing half of the energy available to my body over the last couple of months, as I’ve barely taken a step in any run without having a fully conscious focus on this. In itself, all that brain exercise is hard work, and does indeed burn extra calories but, hey, it’s keeping me moving. It has a number of elements and tricks in it, so bear with me. I will attempt to do it justice, in the hope it helps others in some way:

I’m running now. I’m running, but I’m not really using my feet. I’m wearing stiffer shoes than I have in the past, because I’ve found this helps me not use my feet. Don’t know why, but flexing my feet makes my knee hurt. Each leg needs to come forward in turn (dur!), but the only motor for that is in my butt and the top of my legs. My calves are out of town, my feet are off duty. Making any sense, yet? Of course not. My knees are going to pass each other fairly close, as my upper legs are going to stay as parallel to each other as they can. I’m not actually going to be lifting my knees very high, as my feet are taking very small strides, but counter-intuitively I’m concentrating on pumping my knees forward. My groin is going to feel tight, as it’s going to hold those two legs closer together than they might otherwise stray. If I don’t think this is happening I’m even deliberately going to tilt in at the groin to create that tight feeling (so far it hasn’t blown up). My elbows are staying close to my body but I’m pushing them right back behind me. This is counter-balancing the corresponding leg and letting it come more forward, or stay more tightly in than it otherwise would, perhaps because it’s allowing my hips to open up…dunno. If my left knee starts to hurt, I start throwing my left elbow back as far as possible – this helps almost straightaway.

So now I’m pumping along like some kind of automaton, and a small explosion is occurring in each buttock, which is firing each leg forward 90+ times per minute. If I can’t feel that sensation in my butt, I’m going to apply an electrode to each buttock, pretty much at the most posterior point, and I’m going to fire a little shock through there for each stride. The electrodes are imaginary, in case you’re confused, although…new product concept: running shorts with in-built battery and butt-electrodes – set your desired cadence and off you go! I will call them the Activator Shorts. 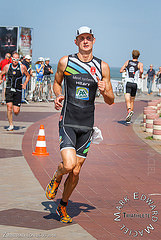 Some random triathlete I have outed

When I catch myself losing this form, I pretend I’m sitting down slightly, just thinking I’m about to squat, protruding my buttocks a little and allowing even more of the effort to come from that region and the top end of my hamstrings (so far, they haven’t blown up or cramped). What do I think I look like? Silly. I need to look really silly. I’m like some kind of poorly animated dinosaur. A T-Rex or something, mechanically pumping those legs, which due to my dinosaur anatomy are all butt and upper leg mass (though in reality the opposite is true). Or I’m a triathlete. Don’t know why, but I have formed this impression of triathletes as all running quite mechanistically and upright – maybe it’s all the cycling they do. I’m a triathlete in compression shorts (I don’t actually wear compression shorts) and I’m pumping my way around the run leg of an Olympic distance race.

If it’s all falling apart, I focus for a while on just rocking my pelvis, so my legs are only pumping downwards. I think about the hip-hike exercise I do at home. This is just pure glute-medes work, I think, and it’s a survival mechanism. If my left knee starts to complain, or I feel I’m off kilter to one side, this will bring the gait back to a more even distribution. Now I must look REALLY silly. Now I’m channelling Kel Knight from ‘Kath & Kim’, doing his power-walking thing. But things will come back together after a bit, and then I can bring back the Buttosaurus, or ideally the triathlete…

So, if you see me out and about on the streets, river, bay or trails, brow furrowed and concentrating hard, you now have some insight into what’s going on in there. Scary much? Funnily enough my average pace is consistently staying at the faster end of my range since I adopted this model. Anything under about 30kms on road will be comfortably around the 4m30s per km average, with sub-20km runs often being below that.

I mentioned above that in addition to pretending I’m some kind of robot dinosaur, I’m also doing some exercises! I forget to do these as much as I should, but I find doing them the day before a run seems to help everything hold together.

There are lots of good resources online about glute-activating exercises. The ones I’m doing:

I realise, with the possible exception of the exercises, this is probably of no use to anyone at all (let me know, if otherwise!), except perhaps for anyone wanting to psychoanalyse me, but I’m hoping if nothing else you got the opportunity to have a good laugh at my expense. Massive overshare. Over-and-out.

One comment on “Mental models for buttastic running remediation”